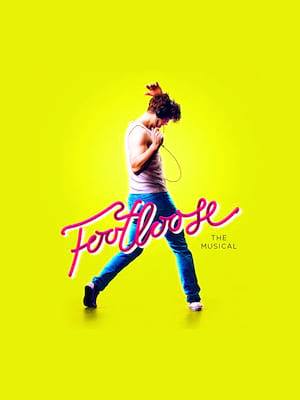 All graphics, images and logos are property of the production

Filled with plenty of well-known tunes and a tendency not to take itself too seriously, this is the perfect way for audiences to lose their blues and kick off their Sunday shoes.

the smash-hit musical live on stage!

In 1984 smash-hit blockbuster Footloose introduced the world to Kevin Bacon, punch dancing and a whole lot of teen spirit. Over three decades later the enduring story is set to light up the regional theatre scene once more during the hotly anticipated return of the UK musical tour, starring none other than Jake Quickenden and Darren Day and helmed by original director Racky Plews (American Idiot, Thoroughly Modern Millie).

Punctuated by classic songs like Holding Out For A Hero, Paradise and the titular anthem of course, Footloose tells the rollicking tale of city boy Ren, a streetwise teen who thinks his life is over when he's forced to move to rural Utah. It's worse than he imagined when he finds out rock music and dancing are banned, so with the help of his rebellious love interest Ariel, he sets about changing the status quo.

You may be required to have had a COVID vaccine in order to attend this performance or show proof of a negative test. Please contact the venue directly for more information on this.

Seen Footloose? Loved it? Hated it?

Sound good to you? Share this page on social media and let your friends know about Footloose at Sunderland Empire.